Shabbat Shalom "Power of Words" Fandom"!! Today (30 August, 2019) we are celebrating the books success and we have a special gift for ALL OF YOU!! For anyone who hasn't been able to get their hands on "The Power of Words - 21 Day Challenge" book, for 5 days starting NOW, you can download it ""COMPLETELY FREE""!!! Just Click Here!!

Get your very own copy right now for free and get the word out. Read it, Like it, Review it and please Share it with your friends and family. They are gonna love it too. It's deal breaker and a life changer for sure!!

Come to understand that anything is possible through the Power of your Words, just click on the link to get your free copy today!! Just Click Here!!!!

(Promotion finishes on the 3rd of September, 2019, so make sure you don't miss this oppurtunity) 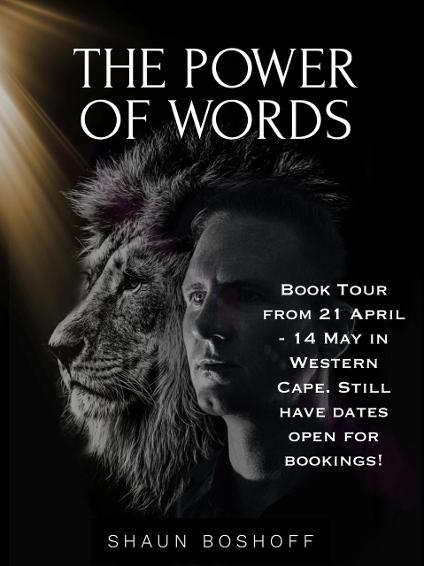 Shaun Boshoff, Author and Documentary Film maker takes you on an adventure, explaining the foundational steps of the 21 Day Power Of Words Challenge and how your words have a direct effect on the outcome of your every day life. Having mastered the Hebrew language, Shaun Boshoff explains the in-depth power God gave mankind in the beginning of creation.
Join Shaun Boshoff and come to understand the Power Of Words through the written word, spoken word, numbers, animals, Hebrew, Israel and the practical steps you can easily take to change the course of your future, to truly live a blessed life. Included at the end of the book is an actual tested and tried 21 Day Challenge, that is guaranteed to leave you with a shocking sensation of how understanding some of the best kept secrets, that God’s chosen people have known for thousands of years, and adhering to those mysteries, can so easily change your life in a matter of three weeks, where you will never pray, speak or think the same again. Take a step of faith and join Shaun Boshoff on this revolutionary 21 Day Power Of Words Challenge.
Shaun Boshoff was born in Namibia, a country on the South West coast of Africa, into a Missionary family. He has been in Ministry most of his life and has spent the last 13 years in Jerusalem, Israel studying the ways of God’s chosen nation. Shaun Boshoff is the founder of www.littlejerusalem.org, an online non-governmental ministry dedicated for the sole purpose of Israel awareness World Wide, through means of teachings and Media.
Just click here to order your very own Paperback or kindle/e-book version online, while the Book Launch Promotion is still valid on Amazon.
Only $9.99 for Paperback (delivery included) and $2.99 for Kindle/e-book. Speedy and Worldwide delivery. Try it now!